On July 27 & 28, 2019 the skies in Grand Junction will shake, and thunder will echo with mighty force. This isn’t a storm though. Planes are going to fill the skies for two straight days as the Grand Junction Air Show takes off. With action-packed displays in the air and on the ground, the air show is full of excitement.

The famed Navy Blue Angels are known for their close flying, precision maneuvering, tremendous roar, and of course, the iconic blue planes. Since the Blue Angels were founded in 1946, the team has flown for over 450 million people all over the United States. Crane your necks up to watch the skilled Navy and Marine pilots loop, roll, and twist around each other in tight formations all while flying at speeds of 400 miles an hour. The Blue Angels reach 700 mph while mirroring each other, flying belly to belly or back to back. 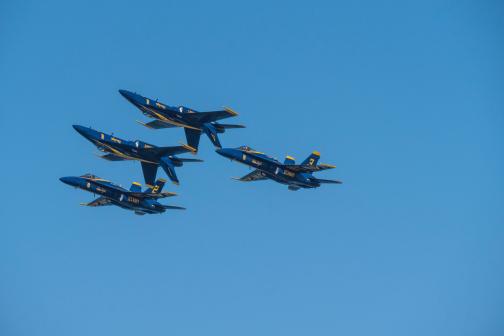 While it might not be able to keep up with the F/A-18 Hornet flown by the Blue Angels, Captain Gary Rower and his Stearman put on an equally impressive performance with their single-prop plane. Rower pilots a vintage single-prop initially built in 1942, the Stearman, which received an upgrade in the '70s. Fitted with a bigger engine and the ability to sustain longer inverted flights, Captain Rower pushes this plane to its limit with steep climbs, sharp turns, and twists and rolls. Since it flies lower and slower and is easily visible with the billowing trail of smoke, the Stearman is always a crowd favorite.

Jet engines won't just be thundering in the sky. They will be hammering down the track too with AFTERSHOCK. These custom trucks show off with wild and colorful paint jobs, but that isn't the craziest thing about them. All the AFTERSHOCK trucks are fitted with jet engines that send them screaming down the track followed by a trail of fire and smoke. Big semi truck rigs and small custom trucks like Jet Fire use these powerful engines to reach speeds of up to 375 miles per hour!

If you’ve ever wondered what it might be like to take a Ferrari or a Lamborghini out for a spin, the Grand Junction Airshow is just what you’re looking for. The Precision Exotics car show features some of the most exotic and iconic cars today and allows you to get behind the wheel and drive, all while supersonic jets fly overhead. On top of their impressive car collection, the drivers over at Precision Exotics are also known to hop behind the wheel to see if they can beat some of the aircraft in a race, like a Cobra Attack Helicopter.

Get up close and personal with aircraft on display too! Meet the E-2 Hawkeye, a flying mobile command center and early detection warning system for aircraft carriers. Known for the large dome on the back of the plane, it also assists in surveillance and search and rescue ops. Also get a first-hand look at fighter jets like the F-35, and the EA-18 Growler, both fast-flying, precision maneuvering machines. A Blue Angel F/A-18 Hornet will also be on the ground, accompanied by the Angel9 TransAm – specifically designed as a tribute to the Hornet and perhaps the only car that could sit next to a Blue Angel’s fighter jet and not look like a toy.

All this happens against the stunning backdrop of Grand Junction. The airshow grounds are surrounded by the Bookcliffs – the longest continuous cliff face in the world, the Grand Mesa – the world's largest flat-top mountain, and Colorado National Monument – 20,500 acres of intricate canyons. Explore what else Grand Junction has to offer.