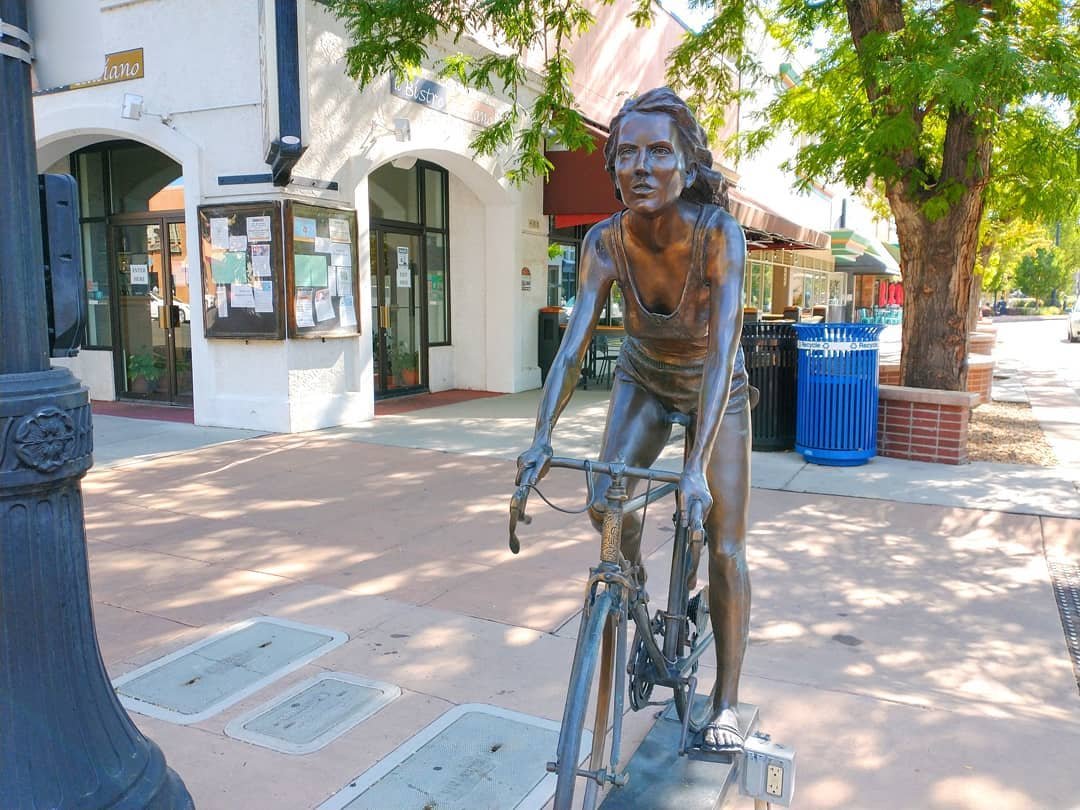 If you’re looking for something fun to do outdoors that blends a bit of art and history, visit Downtown Grand Junction. The open-air art gallery of stunning bronze sculptures is free to the public and frames Main Street. You can enjoy a walking tour of history while visiting each of the “Legends of the Grand Valley” sculptures and learn about the town’s movers and shakers of the past. Additionally, interspersed amongst these historical statues is the Art on the Corner rotating sculpture exhibit – a program that is nationally awarded and has been emulated throughout the country. 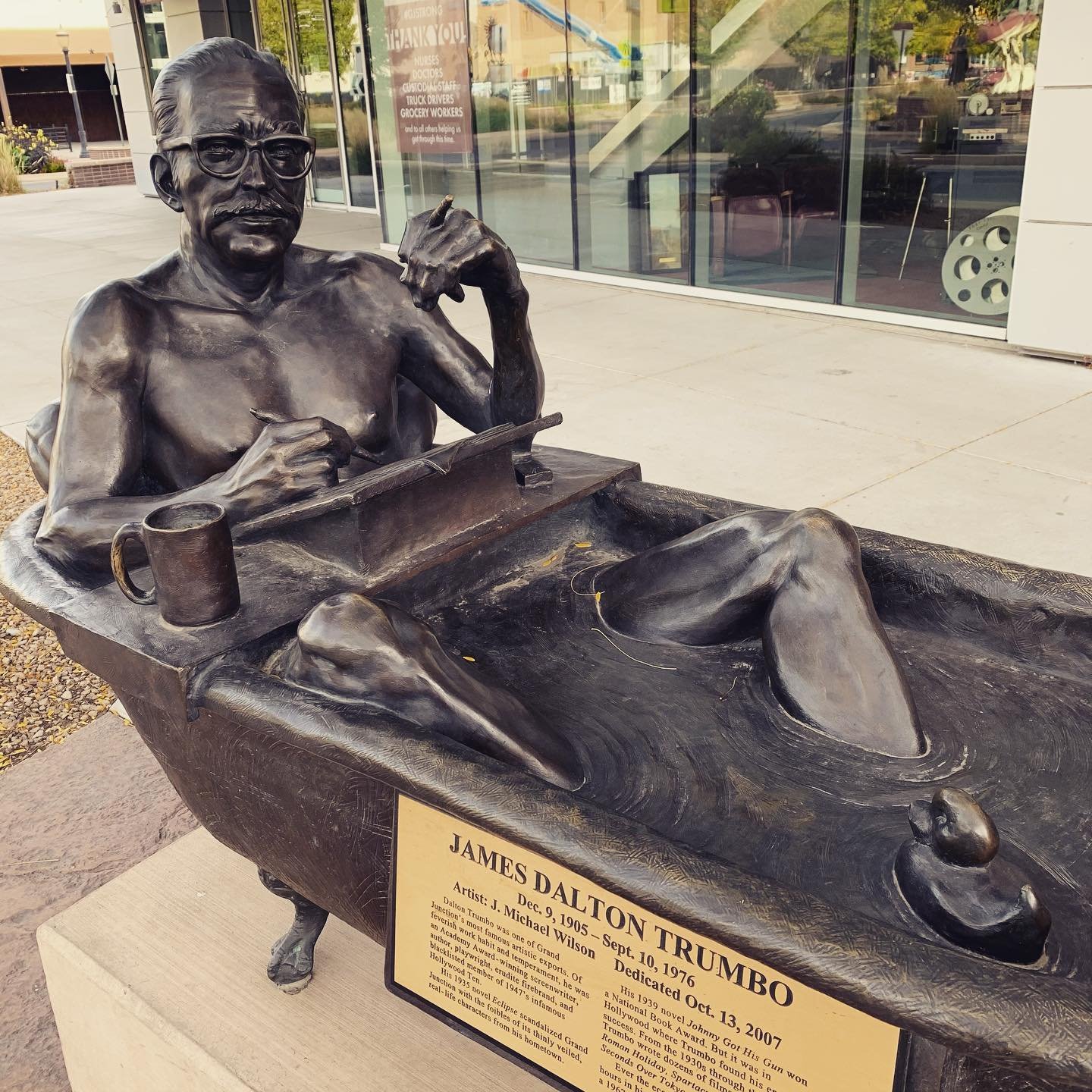 The Legends project began with an unforgettable sculpture of the late Dalton Trumbo (Brian Cranston stars as the controversial writer in the 2015 film Trumbo). Formerly of Grand Junction, Trumbo wrote the novel, Eclipse, which caused quite a stir when it was first published in 1935, for its unflattering portrayal of community members. Trumbo was an Academy-award-winning screenwriter, author, and playwright, and also famous for being a member of the blacklisted 1947 Hollywood Ten. The eccentric Trumbo liked to edit scripts while easing his chronic back pain by soaking in the bathtub. The sculpture in front of the Avalon Theatre (based on a photograph from 1967) shows Trumbo, with pen in hand, soaking in a tub. 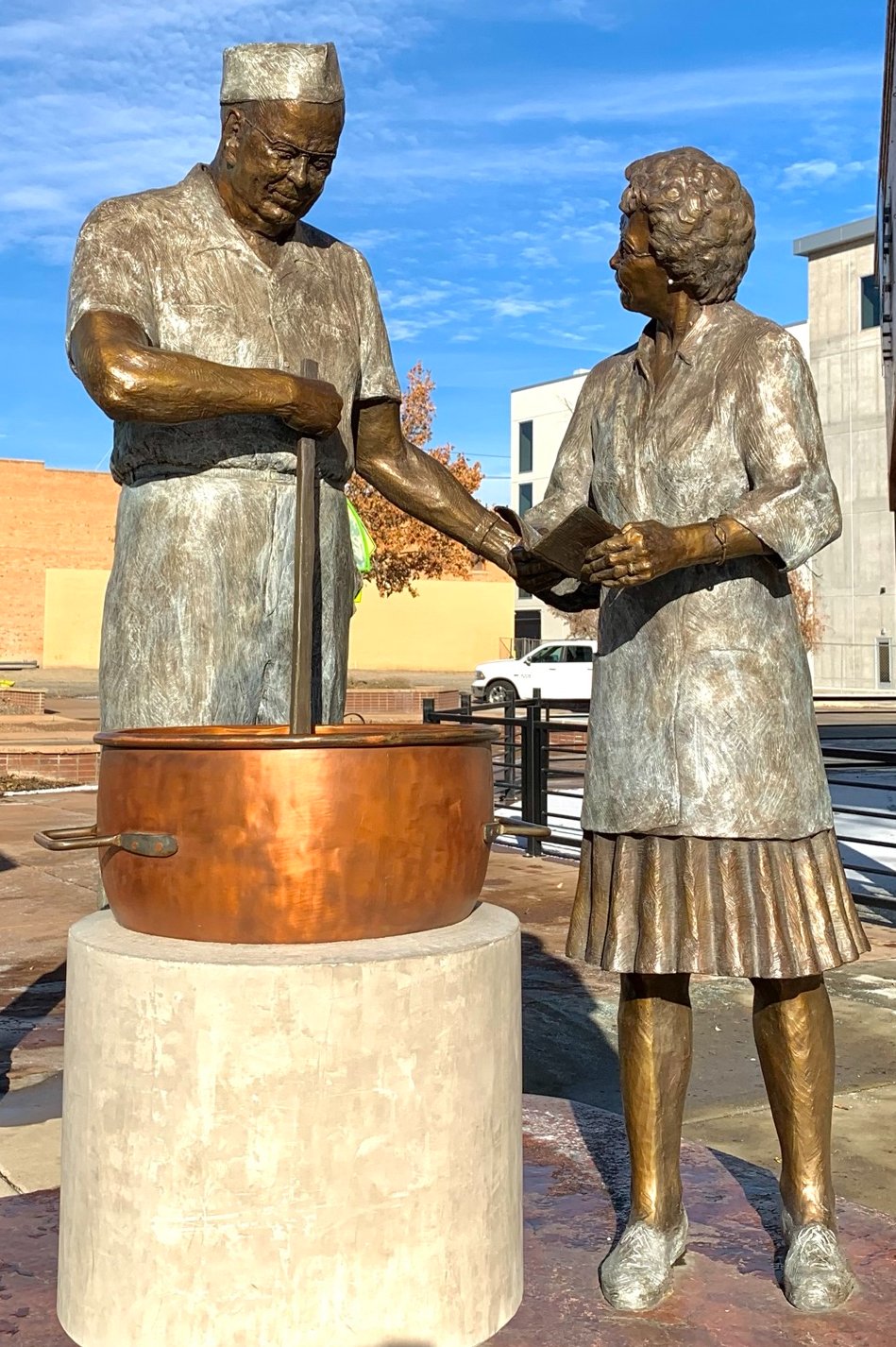 Across Seventh Street from the Avalon is a sculpture of Chet and Vernie Enstrom, founders of the Enstrom Candy Company – a confectionary that put Grand Junction on the map for its “World Famous Almond Toffee.” The fourth-generation family business still exists at the corner of Seventh Street and Colorado Avenue. Be sure to stop in for a delicious sample! The Enstrom sculpture includes Vernie looking at the recipe, while Chet stirs butter and sugar with a wooden paddle in the original copper kettle used to make the toffee! 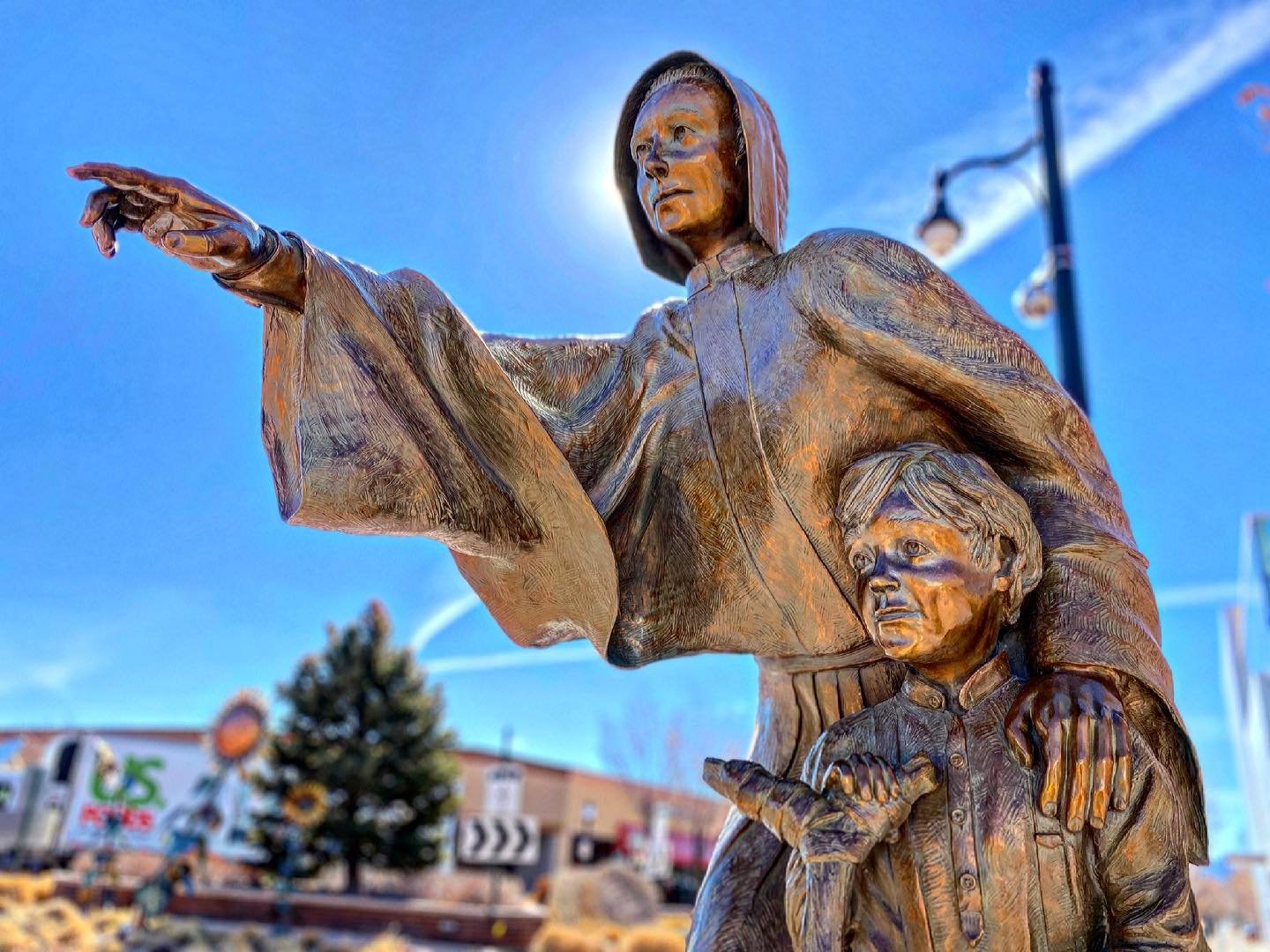 In 1895, at the urging of a local church pastor, the Sisters of Charity of Leavenworth, Kansas, dispatched Sister Mary Balbina Farrell to the frontier town of Grand Junction to establish its first hospital. She collected funds door-to-door to help establish the hospital at 11th Street and Colorado Avenue. The sculpture of a nun with a child is located on the corner of Seventh and Main Street. 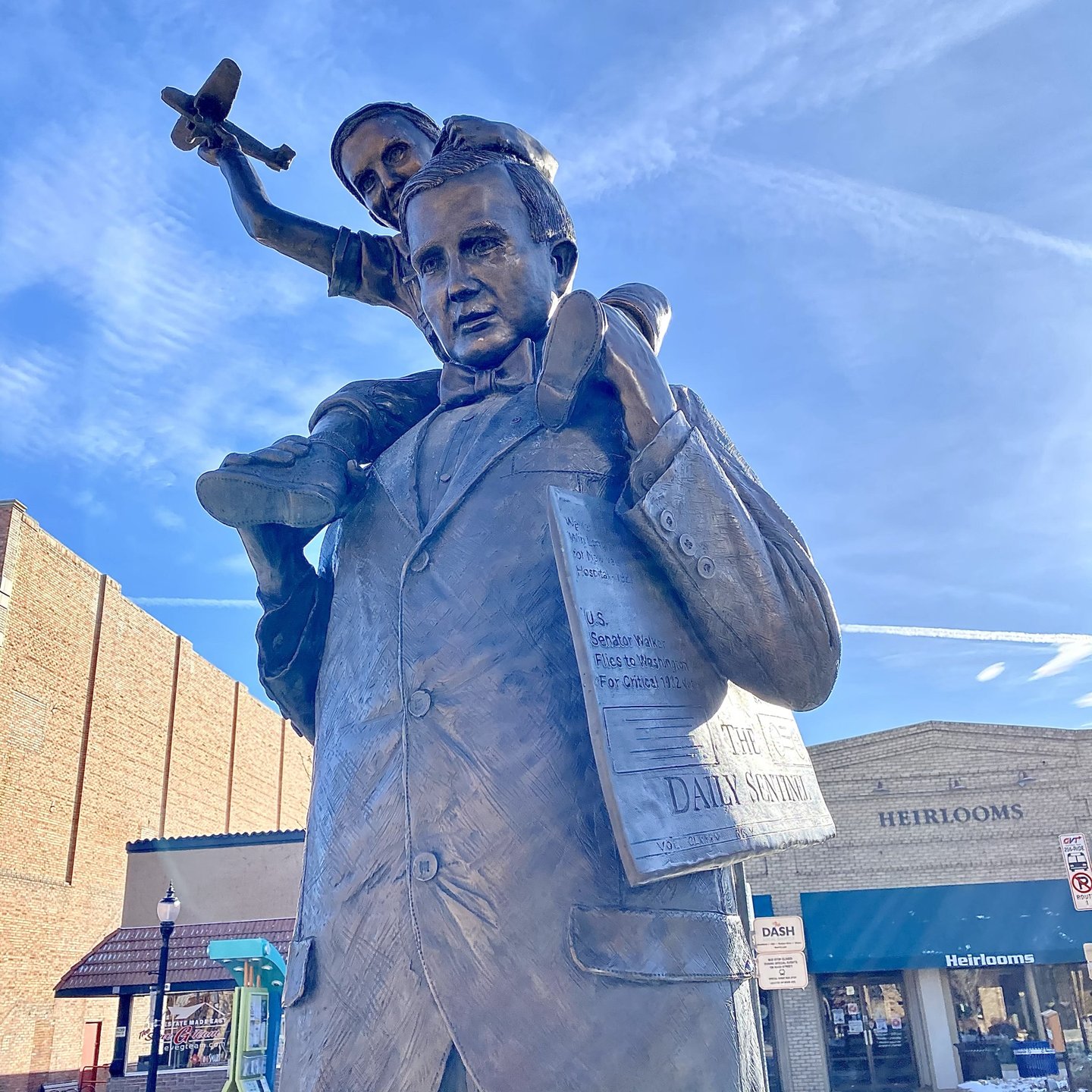 A little further west on Main Street, directly across the street from Trumbo, is Walter Walker with his young son Preston on his shoulders. The tall bronze statue stands at 634 Main St., in front of the former home of the Grand Junction Daily Sentinel newspaper. Walker owned, published, and edited the newspaper until his death in 1956 when his son Preston became publisher. Walker also served as U.S. Senator in 1932. 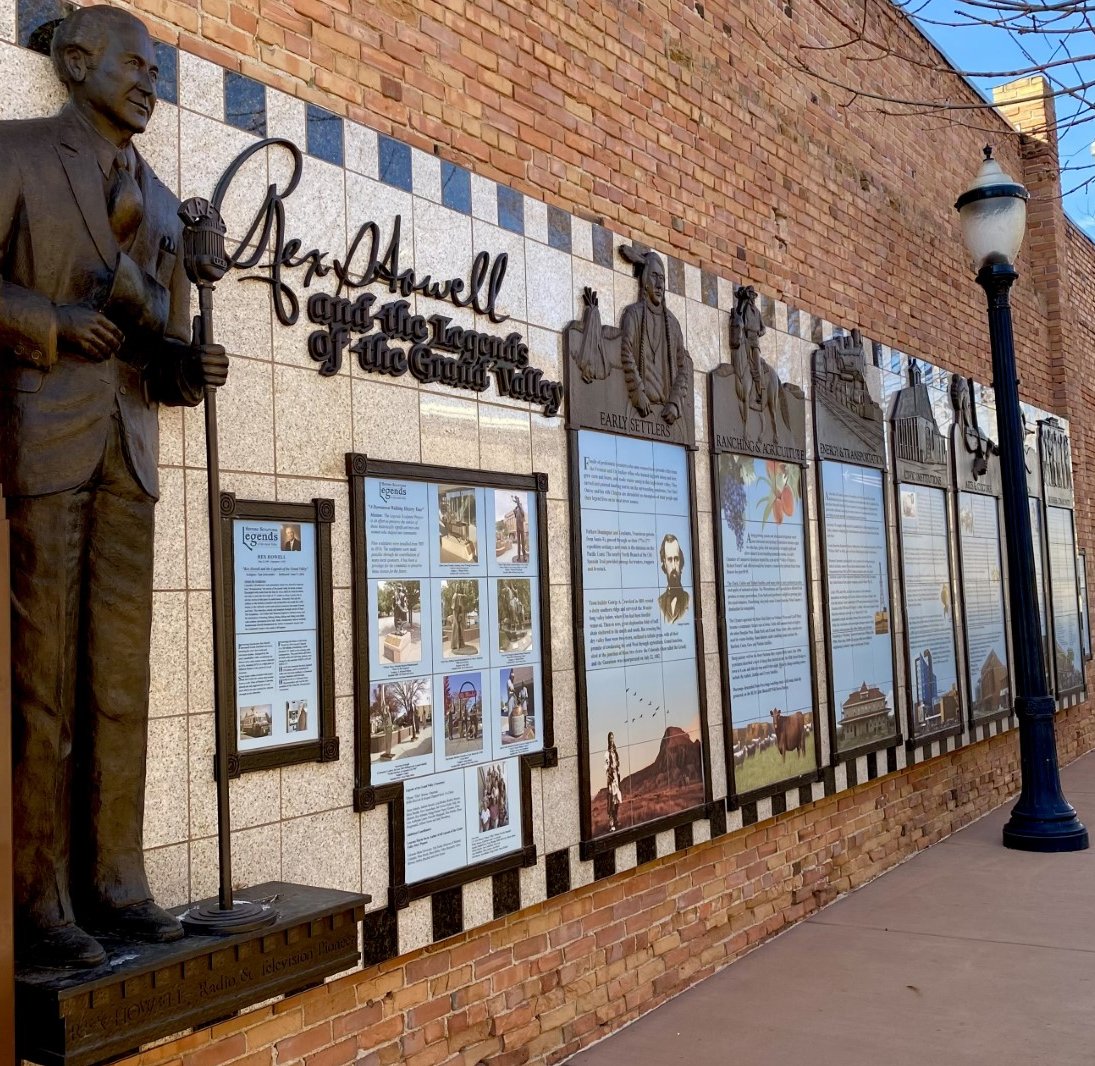 In the breezeway off Main, between Sixth and Seventh streets is a sculpture of Rex Howell, a pioneer radio and television broadcaster from Grand Junction. In this pedestrian walkway, there’s also a huge mural with multiple ceramic and stone panels that tell the story of Grand Junction’s founding. 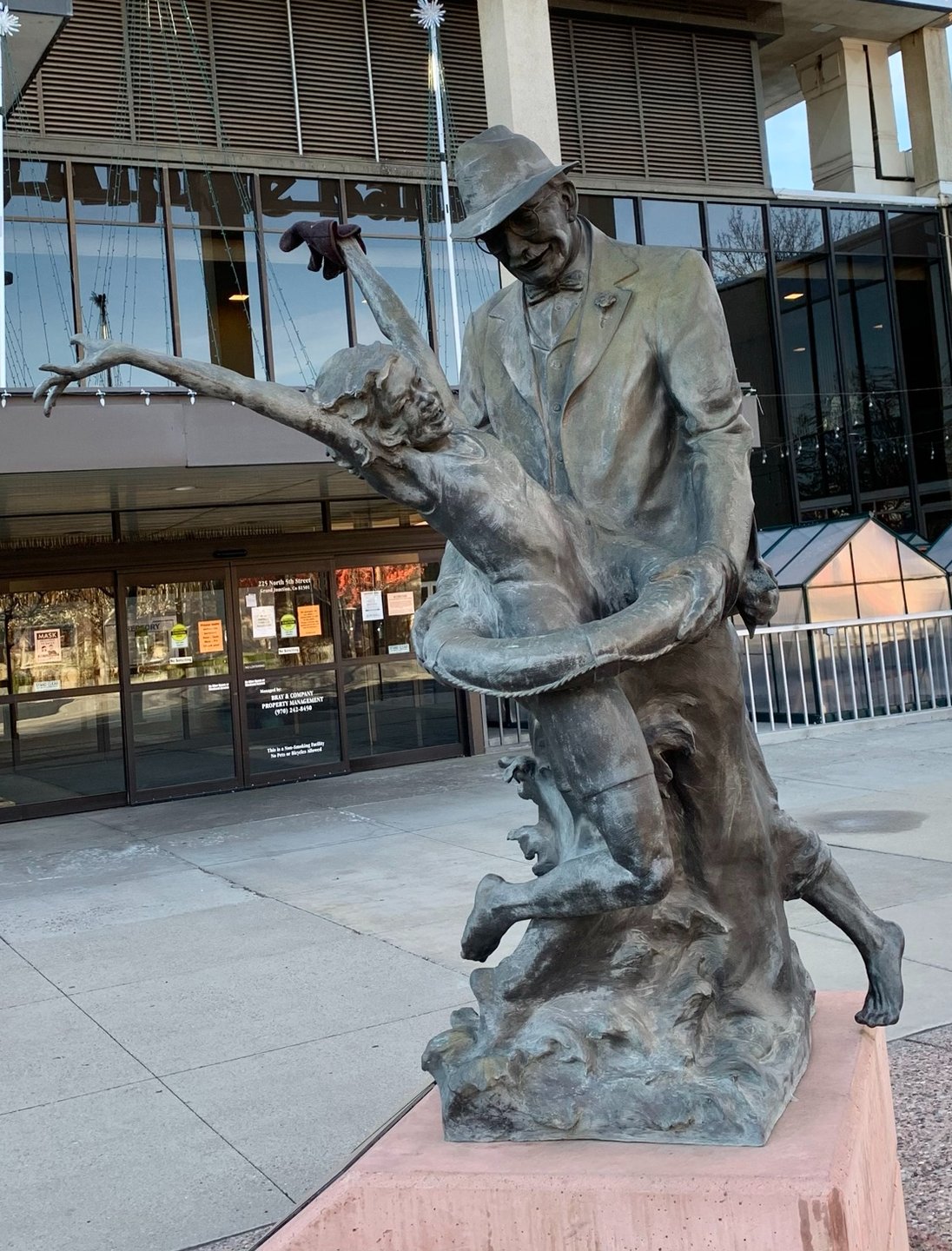 A couple of blocks away in front of the Alpine Bank Building on Fifth Street, you’ll find a likeness of William Moyer, a great Grand Junction philanthropist, who, in 1890, founded the city’s finest department store on Main Street, called The Fair. Moyer named it that because he sold everything at a fair price and paid his staff a fair wage. Moyer is also known for his $25,000 gift to establish a public swimming pool after a local boy drowned in the river. The sculpture captures Moyer and the boy holding a star “snatched from the heavens.” 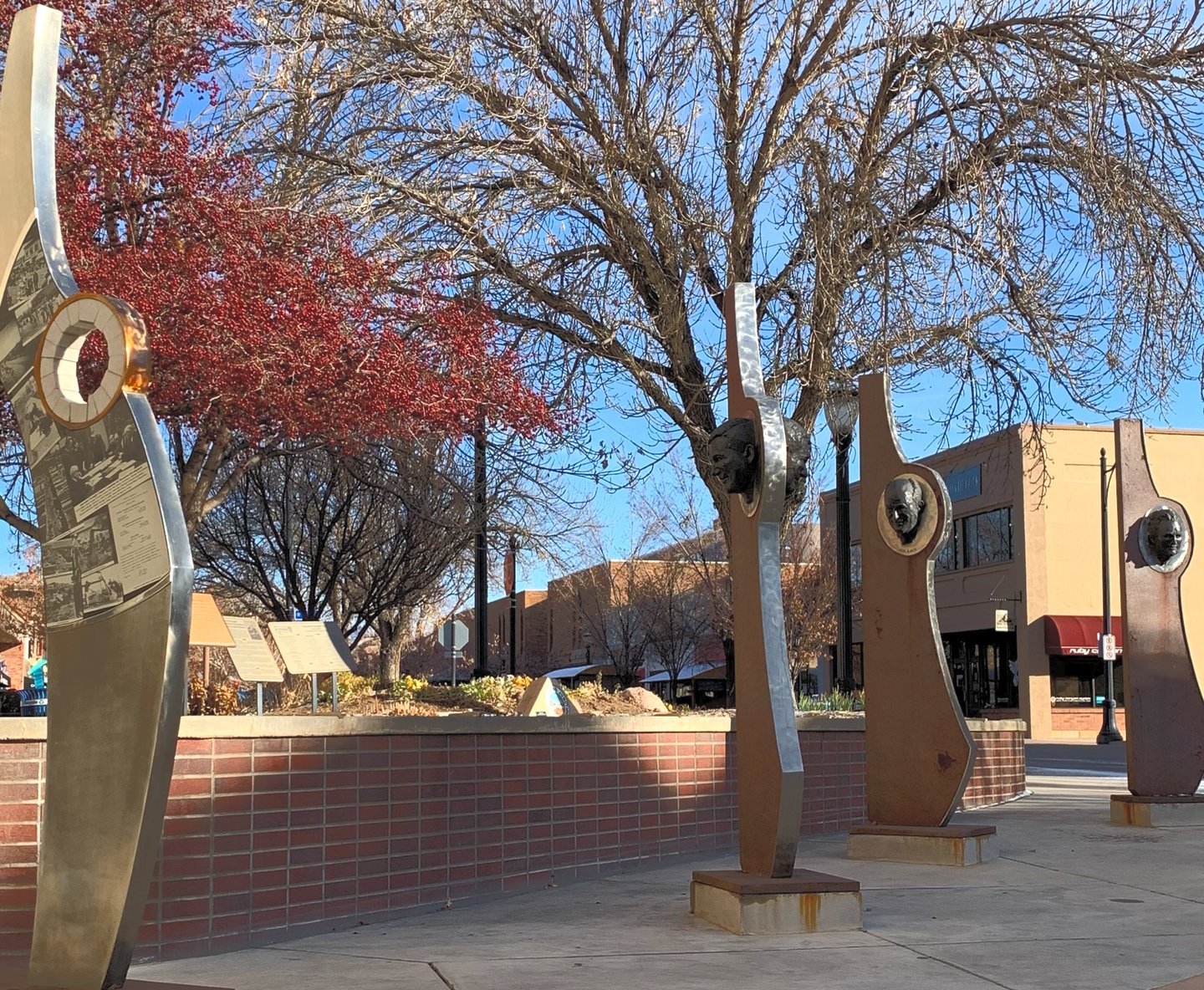 Walk further west to Main and Third streets to learn how community leaders “saved” Main Street during the 1960s. The Operation Foresight sculpture is comprised of four pillars that describe the revitalization of Main Street 50 years ago. A photo obelisk shows Main Street’s evolution from the early 1800s to today. You’ll see why Grand Junction won “All-American City” in 1962. This sculpture, installed in 2012, sits in front of the Springhill Suites by Marriott. 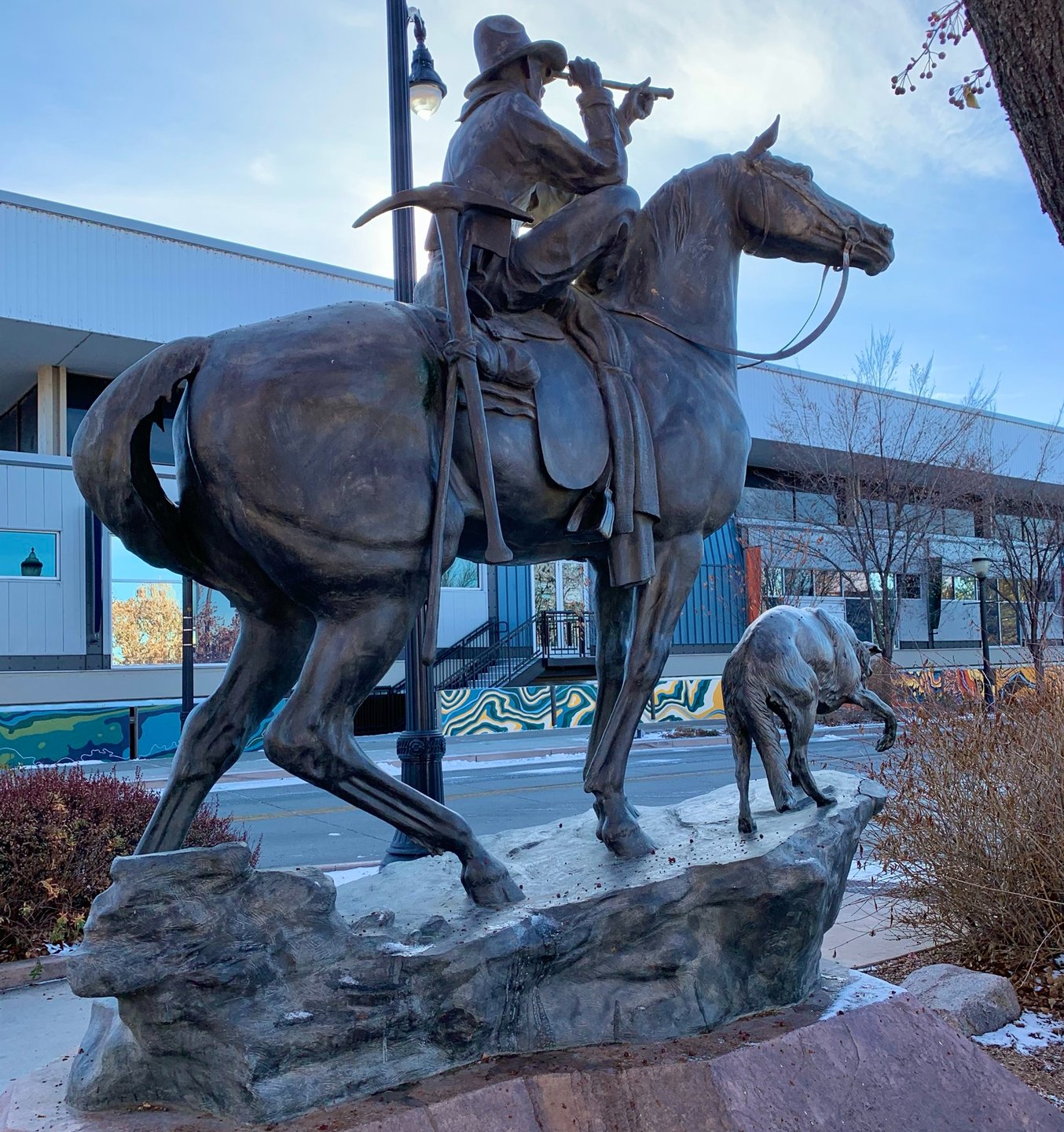 A little further west at Second and Main, across from the Grand Junction Convention Center stands the majestic “Hermit of Monument Canyon” – John Otto – responsible for spearheading the preservation of the Colorado National Monument in 1911. The beautiful park of canyons and spires presents itself more like a national park. It’s easy to view the majestic landscape via the historic Rim Rock Drive, located southwest of the Colorado River just six miles from Downtown Grand Junction. Using dynamite and his pickax, Otto created what is now the popular Serpents Trail, with his dogs, burros, and horse for companions. The sculpture is of Otto sitting on his horse. 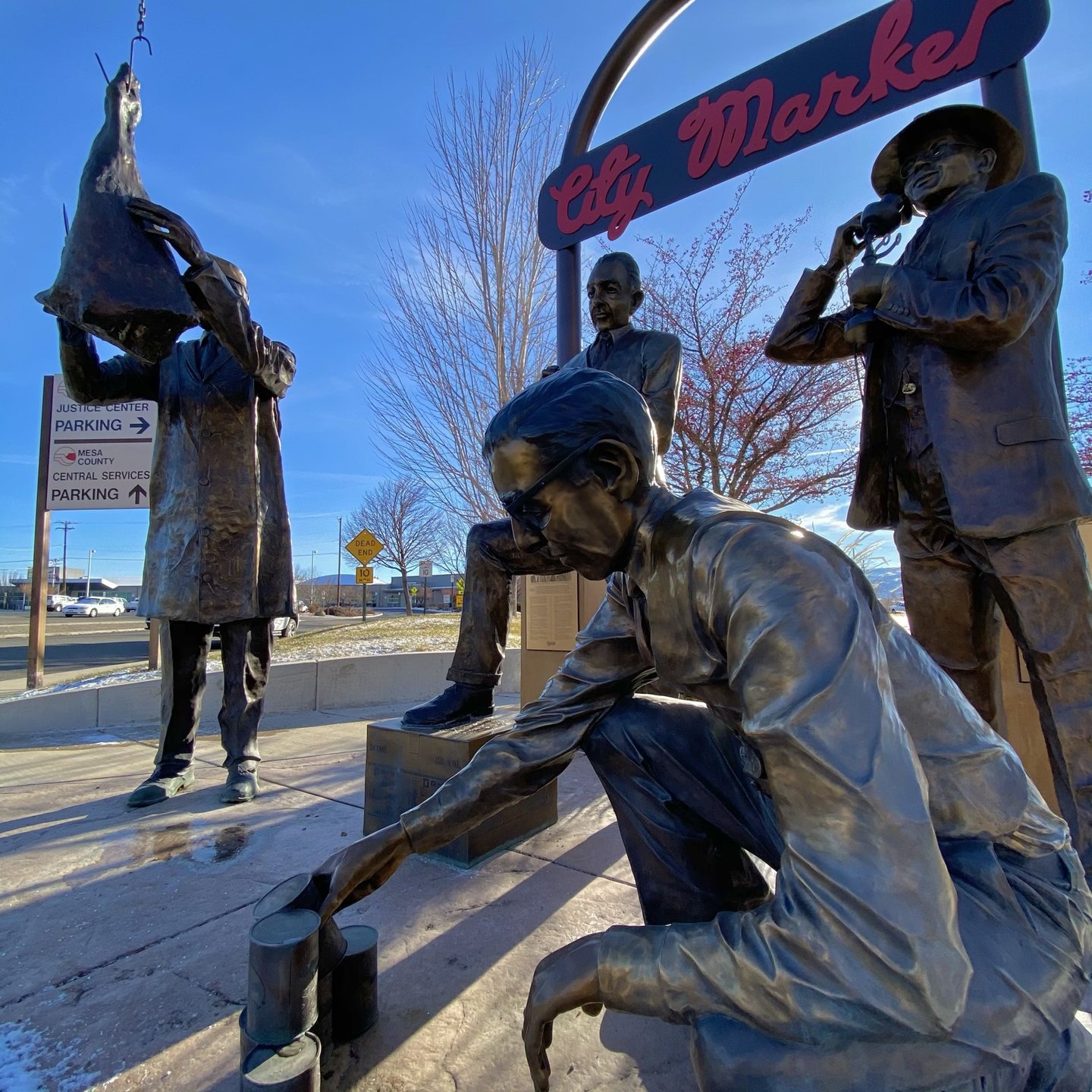 The Prinster brothers – Paul, Frank Sr., Leo and Clarence – are immortalized in front of the former City Market warehouse (currently the Mesa County Central Services building) at First and Spruce streets. The brothers’ grocery empire grew to multiple states, starting with one small City Market at Fourth and Main streets in 1924. The business eventually merged with the largest supermarket chain in the country, The Kroger Co., in 1983. 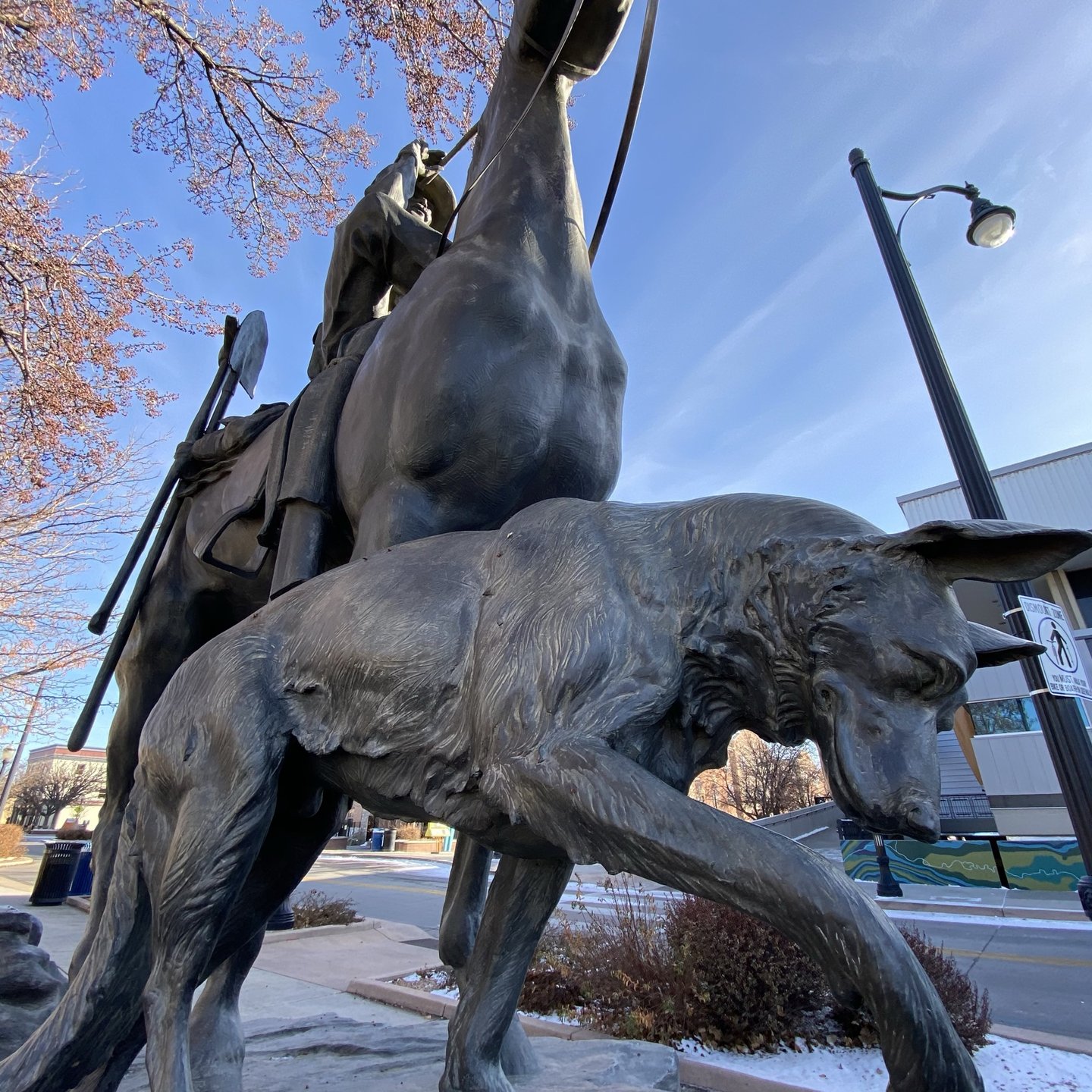 “Anyone who visits can just wander Main Street and get a sense of the people who impacted Grand Junction,” says Legends committee member Jacquie Chappell-Reid. Consider a stroll through beautiful Downtown Grand Junction to experience a fabulous outdoor art exhibit.

Jucuaran, El Salvador: A Glimpse at Grand Junction's Only Sister City
3 Minute ReadPhoto: @arantxaa.glWhat does a city on the western side o
read more