No visit to Grand Junction would be complete without a trip to its biggest (literally) attraction: Grand Mesa. This distinctive formation, with its flat top and steep cliff sides, covers hundreds of square miles. It’s the largest flat-top mountain in the world — and, consequently, is chock-full of things to do all year long. Grand Mesa boasts more than 300 stream-fed alpine lakes at elevations over 11,000 feet, not to mention enough wildlife to keep anglers, photographers, and hikers alike entertained for days. 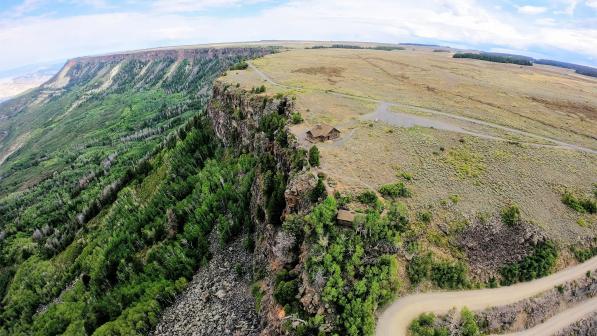 Grand Mesa’s history stretches back millions of years. Mesa — Spanish for "table" and named by the early Spanish explorers of the region — are created by erosion and are usually formed in dry climates, where layers of rock are stacked horizontally. Like most other mesas, Grand Mesa is wider than it is tall.

The formation’s top layer is hard basalt and was formed about 10 million years ago, and it rests on layers of shale and sandstone. The softer layers were eroded over millions of years by the Colorado and Gunnison Rivers. Constant water flow ate away at the shale and sandstone layers, causing Grand Mesa to rise dramatically above the surrounding topography. Today, it looms some 6,000 feet over the town of Grand Junction.

The Fremont people hunted and farmed the region’s fertile soil between roughly 200 and 1300 A.D., leaving behind petroglyphs and pictographs. Pioneers like Kit Carson and John C. Fremont traveled in the region in the mid-19th century, but the area around Grand Mesa is so rugged that it was among the last places in the Lower 48 states to be settled by American frontiersmen. 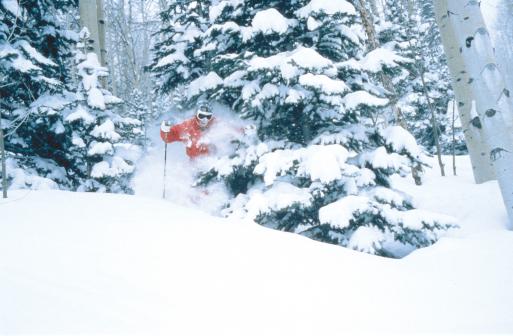 Today, there are tons of ways to enjoy Grand Mesa all year long.

Grand Mesa gets plenty of snow in the winter and is great for both downhill and cross-country skiing.  Jimmy Thomas

In the winter, the Grand Mesa becomes any snow-lovers wonderland. Each year, the Mesa receives an average of over 250 inches of light, fluffy snow. It's the perfect place to enjoy skiing, snowshoeing, and snowmobiling.

A playground for cross-country skiing, there are over 30 miles of cross-country ski trails maintained by the Grand Mesa Nordic Council, including the Skyway, County Line, and Ward Trail systems. The Skyway system is especially challenging and offers access to a warming hut, perfect for thawing out chilly toes and fingers. The County Line system is family and dog-friendly, while the Ward system boasts the best backcountry Nordic skiing on the mesa. (Keep an eye out for motorized users when crossing snowmobile corridors.)

Snowshoers can enjoy all the same trails that are open to cross-country skiers. You'll find a wider track for snowshoes next to the maintained ski trails.

For downhill skiers,  Powderhorn Mountain Resort at the northern edge of Grand Mesa and is perfect for anyone looking to escape the crowds. Powderhorn has four lifts, including the new high-speed quad, the Flat Top Flyer and plenty of beginners, intermediate, and advanced terrain. While there is plenty of terrain for everyone, Powderhorn is known for incredible tree skiing and easy access to plenty of back-country trails. If you're looking to rent equipment, you can get everything you need at the base of Powderhorn, or visit Board & Buckle in Grand Junction. 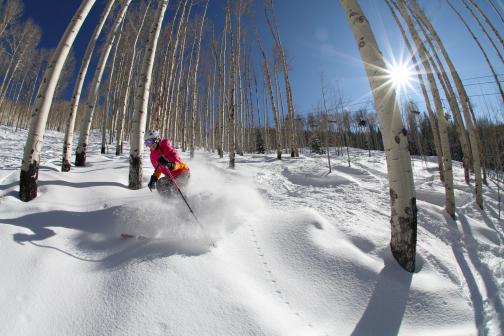 If you're looking for speed, Grand Mesa is a hub for all things snowmobile! Combine high-speed thrills with breathtaking vistas and you've got over 500-square-miles to explore. Because of its size, snowmobiling is arguably the best way to experience Grand Mesa’s expansive wintry landscape. An intricate network of snowmobile trails wind over and around the Grand Mesa, including the 120-mile-long Sunlight to Powderhorn Trail (SP Trail) stretching from Powderhorn Mountain Resort to Sunlight Ski Area near Glenwood Springs. Consider a guided tour or hourly rental from Mesa Lakes Lodge or Grand Mesa Lodge — both rustic cabin lodges can even accommodate sled heads overnight. 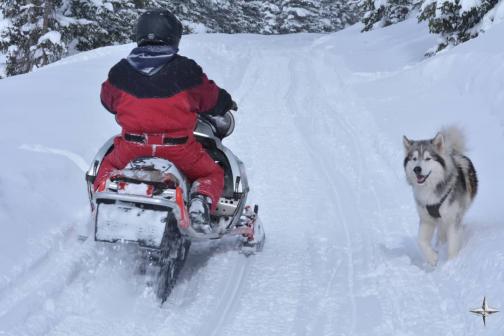 There are plenty of options for those who are never ready for biking season to end too. Fat biking is another beautiful way to take in the grandeur of Grand Mesa in the winter. Fat bikes are can be ridden on any of the roads on the Mesa as well as snowmobile trails. Just remember to stay off the maintained cross-country ski trails!

The 63-mile Mesa Scenic Byway climbs from I-70 up and across the 11,000-foot plateau to Cedaredge. Along the way, it’s well worth a side trip down Land’s End Road (half-paved, half-gravel, and only open in the summer) to the Land’s End Observatory. From here, head out to the aptly named Land’s End Overlook, which sits on the mesa’s rim and offers stunning views of the national forest of the same name as well as the Grand Junction. Keep an eye out for porcupines, coyotes, red fox, and maybe even a moose.

For a classic Grand Mesa adventure, check out the Crag Crest Trail, a 10.3-mile loop and designated National Recreation Trail. Crag Crest runs along the mesa’s gigantic spine, with views of up to 100 miles on a clear day. You can access the trail from one of two trailheads—near Scenic Byway mile marker 27 on the west side or at the Crag Crest Campground to the east. There’s also a short spur trail that connects Crag Crest with the visitor center, plus Ward Lake and Cobbett Lake Campgrounds. Mountain bikes are allowed on the 3.4-mile lower section of the trail (the 6.5-mile upper section is only for hikers and equestrians).

Leave from the westernmost trailhead for rewarding vistas almost immediately. For most of the summer, you’ll find meadows filled with wildflowers here, plus views of the mesa’s distinctive rooster comb cliff bands. Farther along, near Crag Crest’s 11,189-foot high point, take in views of the San Miguel, La Plata, and the San Juan Mountains to the south, plus the West Elk Mountains to the east. To the north, you’ll see the distinctive Bookcliffs and Roan Plateau, and, far in the distance, Utah’s La Sal Range. From here, the trail descends back to the mesa’s many trout-filled lakes.

Two USFS Cabins, the Black Bear and Moose Manor cabins, are available for reservation throughout the summer season. Both semi-rustic cabins were built in the 1930s and have electricity and indoor plumbing. The cabins also offer access to excellent trails on the mesa, including the lightly used Lost Lake Trail, named for the narrow, emerald-colored lake alongside the Grand Mesa rim that is hidden away in a large talus field. (Lost Lake is also popular with anglers looking for big trout.)

TIPS FOR EXPLORING THE MESA

Want to learn more about the Grand Mesa? Check out page 28 of the Grand Junction Adventure Guide.