How to Find the Amazing Arches of Rattlesnake Canyon

The Rattlesnake Arches are off the beaten path, but those willing to make the journey will be rewarded with one of Colorado’s most remarkable landscapes.

The northern end of Western Colorado’s Uncompahgre Plateau comes alive with remote canyons that slice through colorful sandstone layers to form cliffs, pinnacles, alcoves, and - most impressively - arches. In fact, you can find a collection of 35 natural arches, including eight major arches, tucked away in Rattlesnake Canyon. These soaring spans, protected in the 123,400-acre McInnis Canyons National Conservation Area, form the world’s second largest concentration of arches outside of Utah’s Arches National Park. The Rattlesnake Canyon Arches are one of Colorado’s most spectacular wonders, but also one of its best-kept secrets. The Arches are accessible only by a rough drive on a 4x4 track or a 15-mile round-trip trek from a trailhead west of Grand Junction. The Rattlesnake Arches are off the beaten path, but those willing to make the journey will be rewarded with one of Colorado’s most remarkable landscapes. 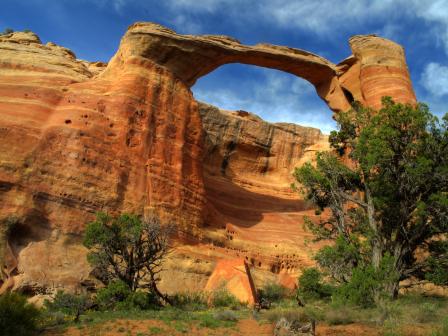 The Rattlesnake Canyon Arches, formed in a 150-foot-high layer of Entrada sandstone, is scattered along a mile of the canyon’s upper rim. The smooth, salmon-colored sandstone was deposited more than 175 million years ago in the form of sand dunes on an ancient coastline. As the ancient inland sea disappeared, erosion started sculpting contoured alcoves in the cliff with wind-blown grit, frost wedging, and quick runoff - thinning out the alcoves until holes appeared. Trickling water later enlarged the holes, leaving today’s magnificent parade of arches.

While the arches have always had affectionate nicknames, it wasn’t until 1972 that any of the arches was officially named. Today, several of the arches retain unofficial designations. Even with their official titles, many locals still refer to them by their longstanding nicknames. Cedar Tree Arch, also called Rainbow Arch, is the longest arch in the group, with a span of 76 feet and a vertical opening of 43 feet. Centennial Arch, also dubbed East Rim Arch or Rattlesnake Arch, is the site’s most elegant archway with a thin 40-foot span above a 120-foot-high window. Many of the other arches are smaller windows stamped through roofed alcoves. 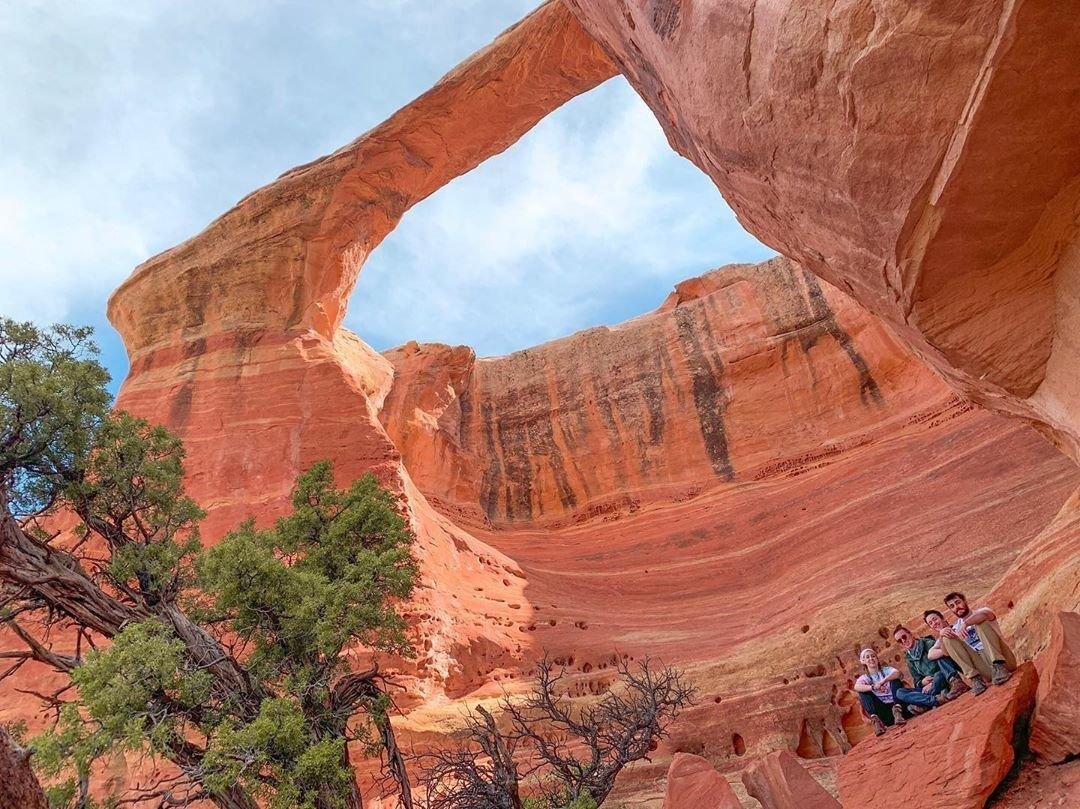 It takes effort to reach the Rattlesnake Canyon Arches, but the reward of breathtaking scenery and solitude through canyons and across scrubby mesas is well worth the challenge. The 13-mile drive on Black Ridge Access Road west of Colorado National Monument takes you to the upper trailhead, which makes for a much shorter hike. A high-clearance vehicle is mandatory, and four-wheel-drive or an ATV is required for the last two miles in order to navigate the rocky obstacle course with steep grades. The road is impassable when wet, so plan accordingly to make sure you don’t visit after rain or snow. The first section of the track is divided into the Upper Road and Lower Road, both are open seasonally from mid-April to mid-February. Hikers without a four-wheel-drive vehicle can park further out and either hike or mountain bike the last couple of miles to the trailhead.

The Rattlesnake Canyon Arches Trail is a 2.7-mile footpath that circles along a wooded area (known in geological terms as a bench) below eight of the area’s major arches. Venture a short 0.4-miles on the trail to an overlook above Cedar Tree Arch. The total distance for the out-and-back hike is 6.2 miles, although it can be shortened to 3.6 miles if you carefully scramble up a steep slab behind Cedar Tree Arch.

The trailhead starts at the end of the 4x4 road and descends down to the bench. It’s easy to follow and passes eight arches, including Hole-in-the-Bridge Arch, Eye Arch, Centennial Arch, Overhanging Arch, Trap Arch, and the stylish Cedar Tree Arch. Return back on the trail or climb the slick rock behind Cedar Tree Arch to complete the loop. A half-mile side trip down the Pollock Bench route leads you to Window Rock Tower, also called Aztec Arch, an opening in a standing rock that’s the area’s ninth major arch.

Hiking up from Pollock Bench Trailhead

If you’re looking for a longer hike or just want to avoid the 4x4 route, the Pollock Bench Trailhead is another option. This trailhead is easily accessible from the mild dirt road running along the Colorado River. The strenuous hike threads up rock-walled canyons, scrambles over sandy slabs, and skirts strangely eroded hoodoos and spires, and ultimately leads you to the same jaw-dropping scenery as the upper trailhead.

After five miles, the trail reaches the Rattlesnake Canyon Arches Trail. Make a four-mile, out-and-back hike to the arches before retracing your steps down to the trailhead. Plan on a full-day adventure and carry plenty of water, at least two liters per hiker. Even though this hike is exceedingly beautiful, it’s not a dog-friendly trail, especially in the summer. With almost no shade, steep ledges, and rocks that can burn the pads of their feet, it’s best to leave furry friends behind. 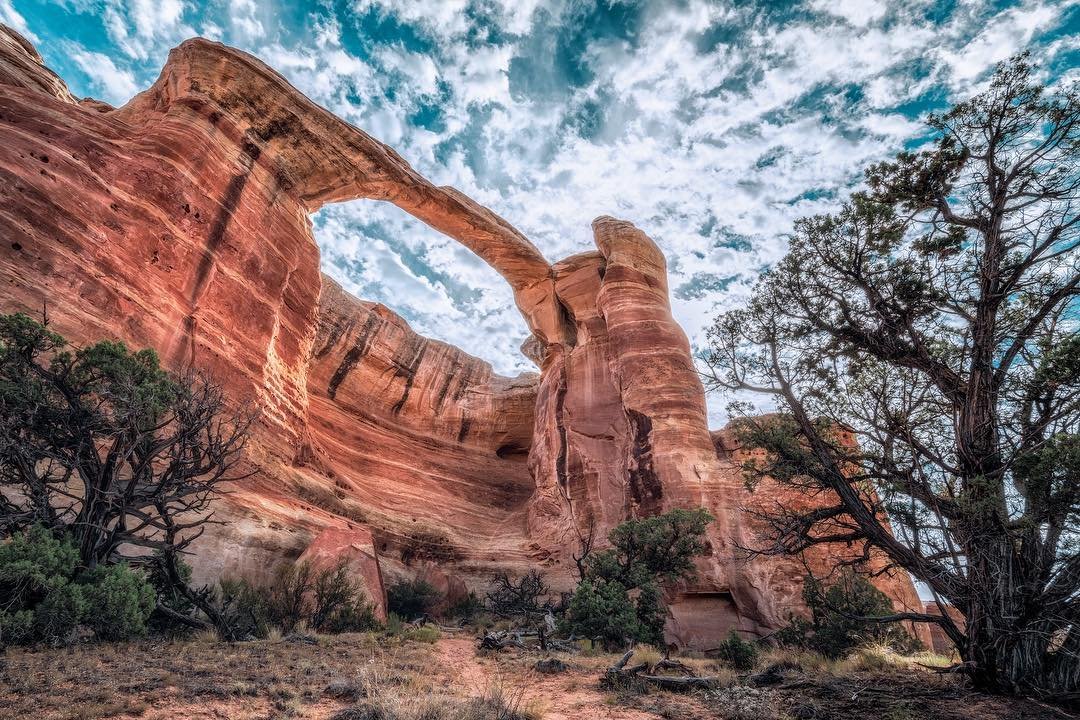 The Rattlesnake Canyon Arches and the surrounding McInnis Canyons National Conservation Area, despite being located only 20 miles from Grand Junction, is a forbidding land dissected by deep canyons and lorded over by towering cliffs and buttes. You’re on your own in this high desert, with no parking lots, visitor centers, rangers, or pavement. Expect a wild experience and be prepared to rough it. The best seasons to visit are spring and fall when the temperatures are moderate. Summer days can be hot, so plan your hike for early morning or evening. The trails are easy to follow and well-marked so while it’s hard to get lost, it never hurts to use an app like COTREX or Hiking Project to track your real-time location. Stay hydrated, carry ample water, sports drinks, and snacks. Be sure to apply sunscreen, wear a hat and protective clothing on sunny days to avoid sunburn.

For experienced and adventurous hikers, this trip is not to be missed. While it’s only a short drive from Grand Junction's amenities, you get the feeling that you’re alone with nature, taking in incredible natural structures millions of years in the making.