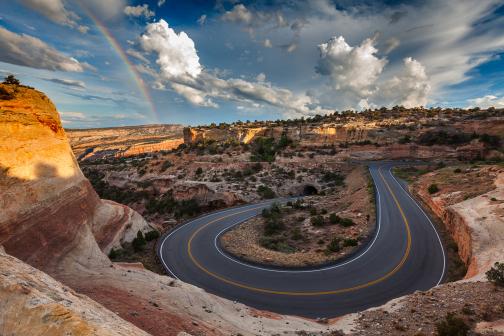 I had no idea what to expect the first time I went through Colorado National Monument. As far as National Parks go, I was pretty familiar with Rocky Mountain and Mesa Verde, but I hadn’t really even heard of Colorado National Monument before. But when I saw the signs for it when driving back to Denver from California, I decided to take a small detour to investigate. I figured an extra 30 minutes wouldn’t make much of a difference in my travel time.

Much to my surprise, I ended up spending the next four hours taking in mind-blowing scenery. I was absolutely awestruck by the way Rim Rock Drive hugs the edge of sheer cliffs of intricate canyons (don’t worry, there is plenty of shoulder) and by the massive red sandstone monoliths that rose hundreds of feet above the valley floor. I think the phrase “jaw-dropping” gets overused, but this was one of those places where I found myself saying “Woah…” and then realizing my mouth would stay oddly open in amazement for extended periods of time.

Rim Rock Drive is the main road through the Monument and is 23 miles end to end. It snakes its way along the edge of canyons through a series of switchbacks and winding turns, and absolutely every minute of the drive is beautiful. There are also dozens of pull-offs for scenic views, epic photography opportunities and short, convenient hikes.

Since my first trip, I’ve moved to Grand Junction and continued to return to the Monument to explore and familiarize myself with this unique hidden gem. Last time I went, the Ranger working the entrance gate recognized me before I had the chance to hand him my annual pass. Thanks to his guidance, I found new look out points and discovered trails that I completely missed on previous trips. I’ve compiled a list of my absolute favorite places; the must-stops I take everyone to who visits me. 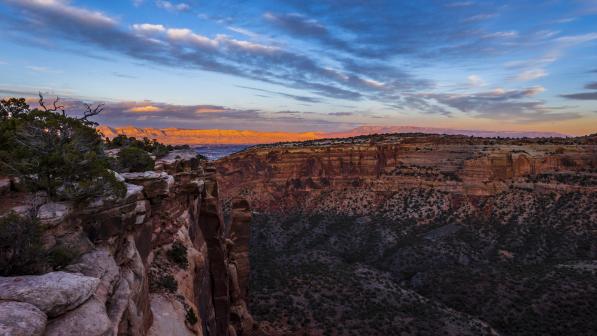 Book Cliff View is right next to the Visitor Center and the Saddlehorn Campground. Aptly named for the stunning view of the Book Cliffs, this short walk takes you right to the edge of Wedding Canyon. If you look one way, you see the city of Grand Junction, the Book Cliffs and the Grand Mesa off in the distance. If you look the other way, you get spectacular views of the canyon, including Independence Monument, Praying Hands, Pipe Organ, and Kissing Couple. The red rock canyons seem to unfold before your eyes, and bighorn sheep can sometimes be spotted on the valley floor.

From here, the Canyon Rim Trail runs along the edge and will take you deeper into the canyon. This is a short trail, less than a mile, and will take you straight to the Visitor Center. Don’t let the name discourage you though; this trail is wide and flat, so you can stay well away from the edge if you want to, or venture closer if heights don’t bother you. Even though it’s a short hike, it’s a beautiful one, give yourself some time to explore the area! 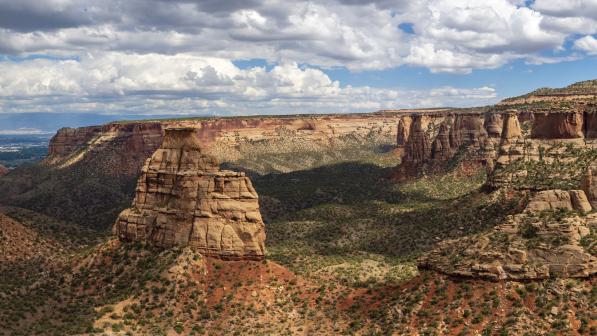 John Otto was one of the first to believe that this wild landscape deserved to be a National Park. For many years, he lived in the valleys and built most of the trails by hand. He even got married in front of Independence Monument, though when his wife realized he still planned on living out of a tent, she quickly left and moved back home. When the area became a National Monument in 1911, John became its first caretaker.

Otto’s trail is another short walk that takes you into the canyon and gives you a direct view of Independence Monument. This giant fin stands alone in the middle of the valley and reaches over 450 feet up into the sky. Every 4th of July, John would climb the side of Independence and plant a flag at the top; a tradition that is still carried out today. Only when John was climbing, he didn’t have much for safety gear and was using metal pipes to create handholds up to the top. From the end of the trail, you can see the route John took up the side of Independence. 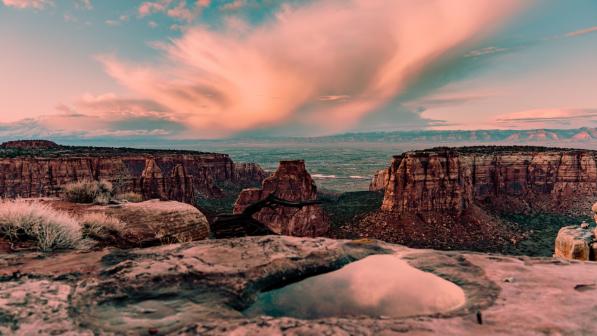 There’s no other way to put it. The view here is unquestionably grand. For a long time, this was a spot I passed over. Somehow, I missed it for the better part of a year, and now it’s one of my favorite places in the entire Monument. It feels almost like an island out in the middle of everything. You’re surrounded by valleys and cliff walls, giant stone pillars and open skies.

This is an especially great place to enjoy a sunrise or sunset. As the sun starts to peak over the Mesa in the East or drop behind the mountains to the west, the entire canyon is filled with golden light. The cliff sides become luminescent, seemingly glowing from within the rock. This might be as close as you can get to the perfect spot to just sit, relax, and take in the artwork carved over billions of years. The experience could only be made better by a picnic.

Cold Shivers is a giant fin that cuts through the valley as a shark might cut through the ocean. You might have noticed a trend here. Book Cliff View overlooks the Book Cliffs, Otto’s Trail takes you to see the side of Independence Monument and John’s climbing route, and Grand View is perhaps one of the grandest views in the entire Monument. Living up to the theme, walking out on this fin will send cold shivers down your spine.

No more than a few feet across at the top, Cold Shivers comes to an end with a large and flat circular rock, balanced on the edge like a precariously placed table. Occasionally brave souls make their way out to the end of Cold Shivers to experience a perspective that can only be compared to standing on the edge of the world. 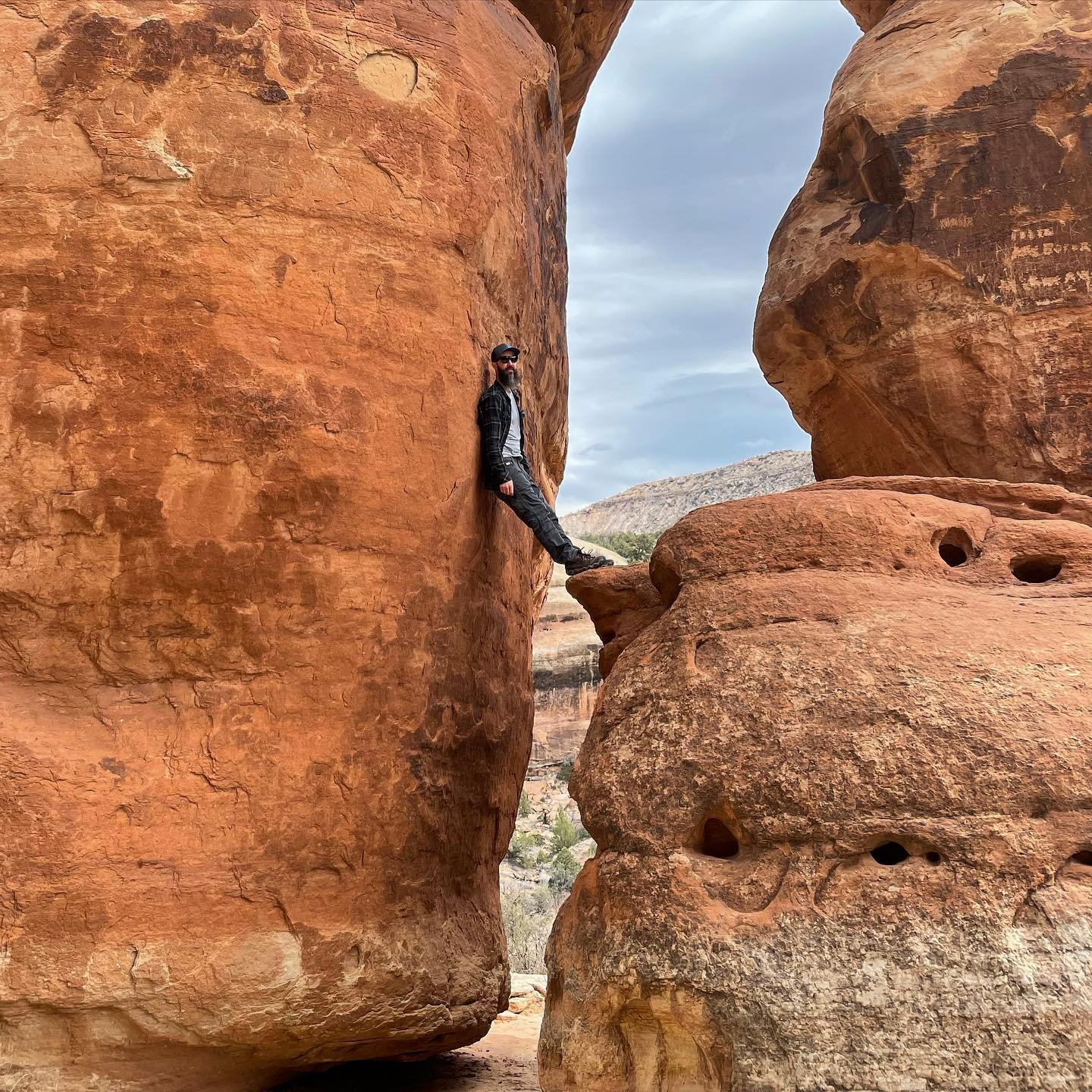 Another short hike, this less than a mile out and back goes up a steep embankment of sandstone into a bowl of monstrous free-standing boulders. These big stones surround the “kitchen” on three sides and can be dizzying to look up at. As you walk into the kitchen, perfectly balanced rocks stand watch like gargoyles. Maybe that’s where the name Devil’s Kitchen comes from…

I should also say that it’s pretty hard to find a spot in Colorado National Monument that isn’t astonishingly beautiful. But these are my favorites, my go-to, can’t miss spots. I love taking new people to the Monument for the first time and showing them around on this little tour I’ve created. I love watching people’s faces as they experience these spots for the first time almost as much as I love the spots themselves.

If you haven’t been to Colorado National Monument yet, or even if you have been but haven’t seen all these spots yet, what are you waiting for? Come visit and explore. I promise you’ll never forget it.

Want to learn more about the Colorado National Monument? Check out pages 10 - 12 of the Grand Junction Adventure Guide.