A Day at the Colorado National Monument

Previous Pause Next
1 of 6
Hike, bike or drive — there's no bad way to spend a day in the Colorado National Monument.

This 31-square mile unit of the National Park System boasts a concentrated version of Colorado's red rock expanses, deep canyons, and sandstone towers, drawing tourists and adventure seekers to this bold and scenic landscape. Best of all, it's easy to have most of the monument to yourself if you're looking for solitude and quiet. 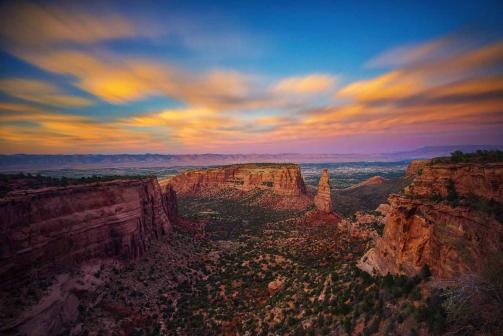 To best explore your temporary private retreat, start on Rim Rock Drive. This historic 23-mile route is the only paved road through Colorado National Monument. Access Rim Rock Drive from either the west entrance near Fruita or the east entrance near Grand Junction. Either way, you'll climb from the ground along the Colorado River up onto the brilliantly eroded Uncompahgre Plateau, dipping into and out of Monument, Ute, Red and Columbus Canyons along the way. This route provides for a true "bucket-list" road biking ride with challenging ascents and descents, and views that are awe-inspiring. Road bikers, please remember your lights for the spectacular tunnels. 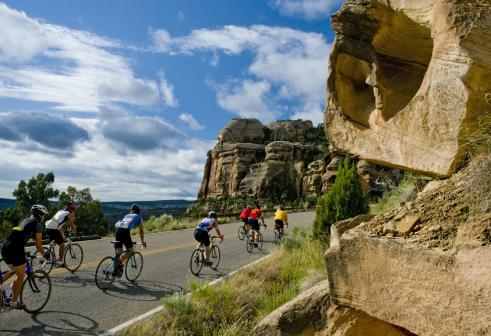 Mountain bikers should head outside of the east entrance of the Colorado National Monument via Monument Road for a locals' favorite trail system. Located on public land managed by the Bureau of Land Management (BLM) Grand Junction Field Office between the entrance to the Monument and Downtown Grand Junction, singletrack riders can find the extensive trail system of Tabeguache/Lunch Loops Trail System and Three Sisters Park.

Chris Capp of Summit Canyon Mountaineering in Grand Junction says that hiking is the best way to get into the Colorado backcountry. In all, there are 13 backcountry trails that extend into the far reaches of the Monument, ranging in elevation from 4,700 to more than 7,000 feet.

"The Monument Canyon Trail leads to the classic tower that many people climb," Capp says, referring to Independence Monument. "You can hike it down from the plateau or up from Highway 340." The six-mile trail winds down the Colorado National Monument's longest canyon, passing a number of gigantic rock formations along the way.

After the steep 600-foot descent from Rim Rock Drive, you'll pass the Coke Ovens, a series of large buff-colored mounds, as well as the Kissing Couple (use your imagination) before reaching 450-foot Independence Monument. Keep an eye out for climbers on the mushroom-topped spire. 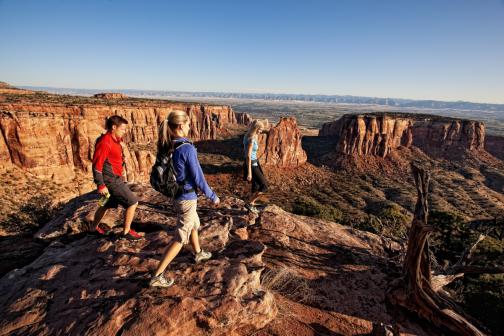 Capp also recommends the Upper Liberty Cap Trail, which meanders across Monument Mesa for some 5 miles to a distinctive stone outcrop overlooking the Grand Junction area. "It's on top of the plateau instead of down in a canyon," he says, "so it's not as steep and has lots of good views."

For a taste of history, take the Serpents Trail near the eastern entrance. Once the original route onto the Colorado National Monument, this aptly named path has more than 50 switchbacks in just over 2 miles. It was built in the early part of the 18th century by John Otto, who explored the high country when even most locals thought the canyons were inaccessible to humans. 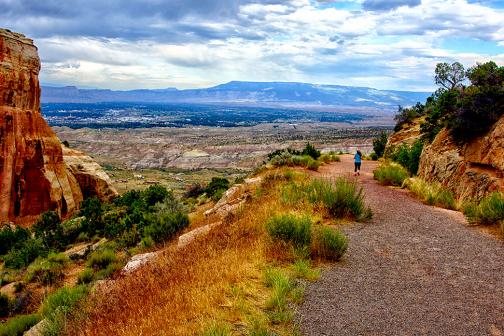 Today, Otto's Trail leads half a mile along a ridge from Rim Rock Drive to the Pipe Organ formation. Other short paths worth a stroll are the Window Rock Trail, a quarter-mile loop with great views of stone towers, and the Canyon Rim Trail, which skirts the edge of colorful Wedding Canyon. Reach the Devil's Kitchen, a boulder-ringed grotto, from the east entrance along a 3/4-mile trail of the same name.

You can see the La Sal Mountains and the canyon country of neighboring Utah from the Black Ridge Trail along the western edge of Colorado National Monument. This roughly 5-mile, one-way trail is the highest in the Monument and briefly crosses into adjoining Colorado Bureau of Land Management land. 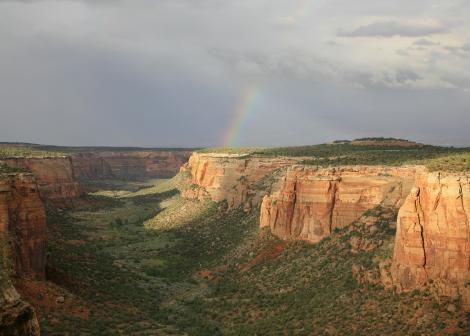 If you're ready for an adventure, head down Ute Canyon from Rim Rock Drive. A developed trail takes you down a rough descent into the ravine. It's about seven miles to the Monument's eastern edge near Liberty Cap. From here you're on your own; follow the streambed, which may be dry or have seasonal pools after rains, and keep an eye out for natural arches along the canyon walls.

For more information about the Colorado National Monument, visit the National Park Service website or call 970-858-3617. The Monument is open daily, $25 per car for one week.