Discover Moose on the Grand Mesa

When you’re hiking through the woods on top of the world’s largest flat-top mountain, the Grand Mesa National Forest, listen carefully for snapping branches in the distance. Keep your eyes peeled for lumbering beasts moving amongst the trees. The dense pine forests and aspen groves, combined with hundreds of miles of streams and the wetlands from over 300 lakes, make this mountain an ideal home for moose. 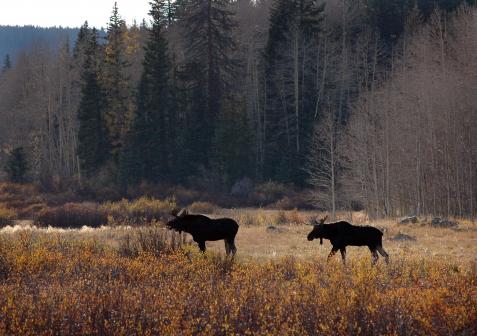 Over 400 of these massive solitary animals wander the woods, and with over 500 square miles on the Mesa, they have plenty of room to roam. Even with such an expanse of wide open land, it’s still not uncommon to come across one while hiking in Grand Mesa National Forest. It wasn’t always this way though.  It wasn’t until 2001, that Colorado Parks and Wildlife (CPW) started considering introducing moose into the Grand Mesa National Forest. Prior to this, no moose could be found in the area.

This process didn’t happen overnight, of course. As with any wildlife introduction, much research had to be done to understand whether moose could easily cohabitate and what effect would they have on existing vegetation and species.  Was the Mesa a suitable habitat for moose? How would the sudden presence of such large animals affect deer and elk that already called the area home? How many moose could live on this flat-top mountain?

Eventually, CPW determined that the Mesa could support as many as 400 moose, even during years of low vegetation. In 2005, CPW started bringing in moose from Utah and releasing them on the Grand Mesa. By 2007, 91 moose were transplanted and were released in three main areas. The Skyway area, Muddy Creek and Buzzard Creek drainages had become the new home for these imported moose.

As expected, moose flourished on the Grand Mesa. That initial 91 grew to over 400, a healthy population according to CPW. For the last several years, Colorado Parks and Wildlife has been able to release moose tags to hunters for the Grand Mesa area, thereby supporting conservation efforts. Conservation is defined as preserving, balancing and protecting biodiversity, natural resources and the environment. 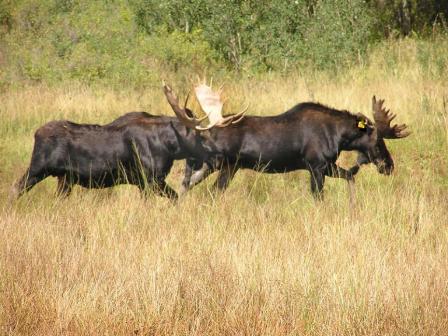 This program was so successful that every year, the Grand Mesa is host to Moose Day on the last Saturday of July, to celebrate the introduction of moose to the Grand Mesa. Bring a picnic to this family-friendly event to learn more about moose on the Grand Mesa. There are moose-themed crafts for kiddos and if you feel like a hike, tag along with a wildlife guide. Learn how Colorado Parks and Wildlife tracks not only moose, but other wildlife in the area through the use of remote collars.

Watching these enormous animals move is captivating. Their long legs might seem clumsy, but they can be surprisingly graceful, especially when moving through high bushes or deep water. Not only are they graceful, but they are astonishingly fast and powerful when they decide to run.

A pair of binoculars always come in handy as moose are best viewed from a distance. Moose can be skittish and unpredictable, so it’s best to give them their space so they feel comfortable and undisturbed. It’s important to remember that this is their home, we are only visiting it. You can help continue to make the Grand Mesa a wonderful place to visit by being respectful and leaving no trace. 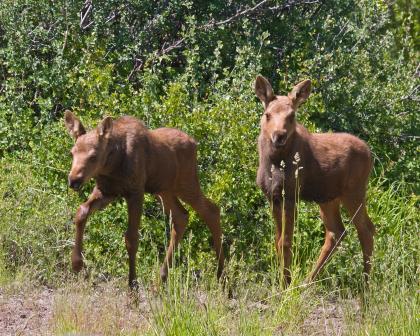 Check out more ways to discover the Grand Mesa on page 28 of the Grand Junction Adventure Guide.