Blue Angels vs The Thunderbirds

Who has the higher bragging rights, the Navy Blue Angels or the Air Force Thunderbirds? That’s a tough one. Both are elite squadrons that fly supersonic fighter jets flown by pilots with combat experience and are known for their impressive flight formations and maneuvers. Both groups travel across the country and the world to perform aerial shows and flight demonstrations, like the Grand Junction Air Show for Navy Week. To the untrained eye it might seem as though, other than the color, the two are the same. 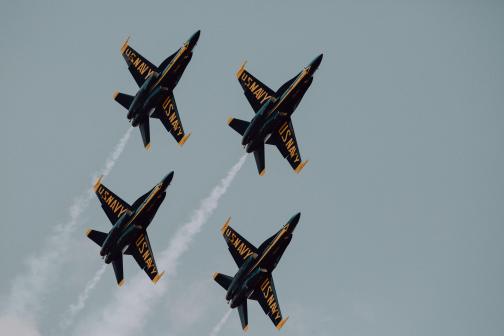 There are some significant differences between the two though, one being what each squadron is flying.  Based out of Florida, the Blue Angels are known for their classic navy blue and yellow F/A-18 Hornets and duel engine jet. The Air Force Thunderbirds are stationed in Colorado Springs, and sports the classic red white and blue single-engine F-16 Fighting Falcon. 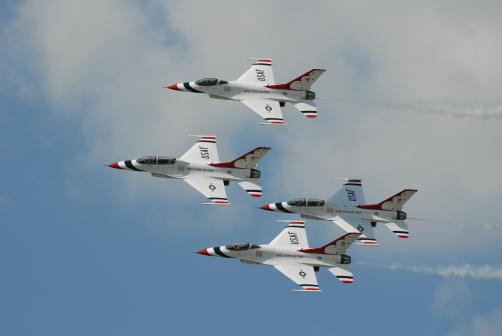 Both planes are capable of performing extremely sharp turns, loops, rolls, and can sustain long periods of inverted flight. Both can be adapted for nearly any type of mission, though the Air Force F-16 is frequently used for close air support and air superiority, while the Navy F/A-18 is more often used for air to air operations and bombing missions. Each plane can reach speeds above 1,500 miles per hour, but keep the throttle limited to 700 mph during exhibition shows.

So, when it comes to planes, both squadrons are in close competition. The Air Force will continue to fly the F-16 Fighting Hornet, but the Blue Angels are in the process of transitioning to a new plane. By 2021, the Blue Angels will all be flying the Super Hornet version of the F/A-18. A Fighting Falcon costs roughly $14.5 million dollars, making it one of the cheaper planes in the U.S. Military. The Navy Super Hornet costs about $70 million. 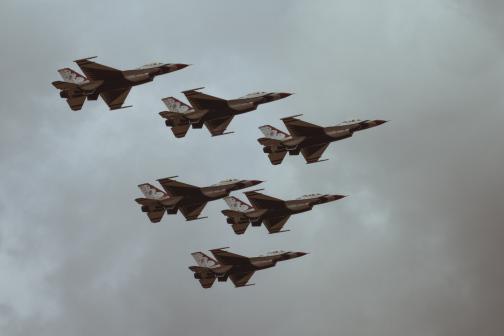 Blue Angels have a bit more history than the Thunderbirds. The Blue Angels were formed in 1946, shortly after WWII ended. The Thunderbirds were born seven years later, only six years after the Air Force was founded. Both were created as goodwill programs with the hopes of educating people about the Navy and Air Force and keeping up interest and support in military programs. 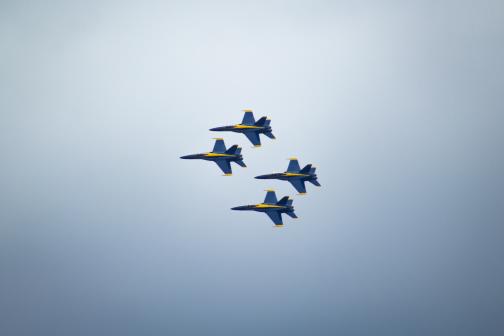 With the technical expertise needed to fly either piece of high-performing machinery, it’s not surprising that there have been crashes. In 1982, four Thunderbird planes collided during a training exercise. A Blue Angel crashed during an air show in South Carolina in 2007 and 2016 at an air show in Tennessee. Recently, a Thunderbird crashed during a flyover at an Air Force Academy Graduation that was being attended by President Obama. The pilot did get to meet the President after the accident.

So, between the two, it's neck-and-neck for who has higher bragging rights, or who puts on the better show. One of the great things about the United States is that our military is so accomplished and sophisticated, that the only rivalries they can actually have is with each other.

Each squadron is made up of incredibly talented pilots who put on spectacular, nail-biting performances.