When President Taft signed the bill designating Colorado National Monument over 100 years ago in 1911, John Otto made the first ascent of Independence Monument. Once John summited, he committed to continue this feat every 4th of July. Otto would make the trek up the 450-foot fin to plant the American flag at the top. This is a tradition that is still carried out today. Every 4th of July you can watch climbers carry the flag up Independence Monument and then proudly stake it at the top. 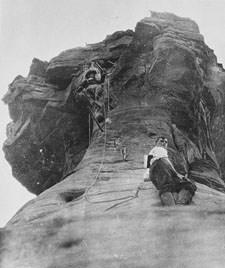 Safety gear has come a long way in the past 100+ years. Today, climbing rope is stronger than steel, nuts and cams are strong enough to support anything short of an elephant, and harnesses and belay devices can quickly arrest a fall. Back when Otto first summitted Independence, he didn’t have such luxuries. Primitive rope and archaic anchors were all he had at his disposal.

Otto spent weeks, working day after day, to create a route up the side of this impressive tower. While he chose to follow natural cracks and slopes on the rock where an ascent would be the easiest, there were spots where “easy” wasn’t an option. Where handholds were lacking, Otto hammered iron pipes into the rock. Where there was no place for shoes to get traction, he carved out steps. This was laborious work all done by hand while dangling on the side of a cliff hundreds of feet above the ground. 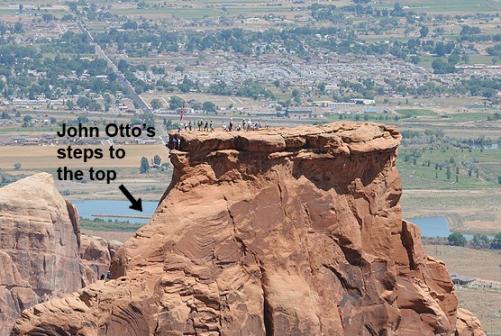 While carving out footholds and smashing iron pipes into the side of the rock might offend the sensibilities of some purist climbers, there are two important things to remember. First, John Otto wasn’t a purist climber, he was a wilderness lover. Second, he wanted the entirety of Colorado National Monument to be accessible for everyone, and that included climbing to the top of Independence Monument. John wanted anyone to be able to peak, reinforcing that all you needed to make the climb was a heavy dose of courage.

This vision remains true today. Anyone can follow John Otto’s route to stand victoriously at the top this iconic landmark, just like Otto did back in 1911. Well, there’s one significant difference - climbers today have the benefit of modern safety gear and we encourage you to use it. 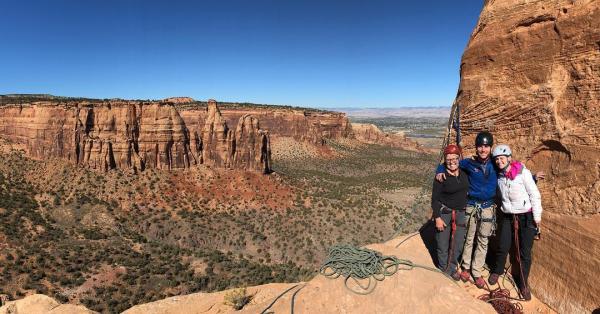 All climbing in Colorado National Monument today is trad climbing, aka traditional climbing technique, meaning you have to place your safety gear as you climb. This does require some knowledge and skill, as gear that is not set properly can result in a fall. Thus, only experienced climbers are encouraged to climb in the Monument, or you can hire a guide.

A guided trip to the top of Independence Monument is a popular way to check this tremendous accomplishment off your bucket list. Several climbing outfitters are approved by the Colorado National Monument, and they are not only climbing experts but Monument experts as well. They know every pitch, handhold, and crack of Independence Monument and will provide everything you need, from gear to guidance. If you are looking for a reset to your daily life, we promise that ascending Independence will monumentally change your outlook and will ground you in ways you least expect.

Reach out directly to the guide below to plan your adventure!

Learn more about the Colorado National Monument and climbing Independence Monument on page 11 of the Grand Junction Adventure Guide.

The Grand Junction a

Here's all you need to know for your Independence