Previous Pause Next
1 of 4
Stroll through ancient history or go on a dig for real dinosaur bones!

Rabbit Valley and McInnis Canyons National Conservation area near Grand Junction are perfect areas to explore for budding paleontologists or anyone interested in learning about prehistoric creatures. 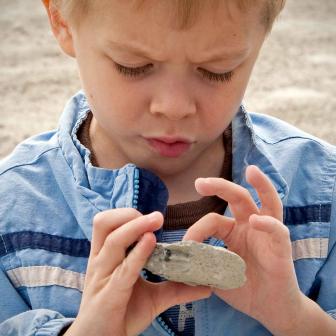 The high desert area approximately 30 miles northwest of Grand Junction, better known as Rabbit Valley, is home to the active Mygatt-Moore Quarry where more than 4,000 dinosaur bones have been found since the 1980s. Species regularly found here include the Camarasaurus, Allosaurus and Camptosaurus. The quarry is also the discovery site of the Mymoorapelta, a small, armored, plant-eating dinosaur from the Jurassic Period.

There are several ways to enjoy the Rabbit Valley area, which still captures the feeling of prehistory with its wide-open views and rugged rocks. Self-guided hikes along the Trail Through Time let you explore at your own pace. The well maintained 1.5-mile loop starts at the Rabbit Valley Natural Research Area, climbs up the side of the hill and circles its way down and back around. The trail takes you past the Mygatt-Moore Quarry as well as along ancient streambeds that contain dinosaur specimens roughly 140 million years old. Be sure to stop at the 21 interpretive sites that provide details about geology and past dinosaur excavations.

Also west of Grand Junction and just south of Fruita in the McInnis Canyons National Conservation Area is Dinosaur Hill. This is an easy 1.5mile roundtrip hike perfect for both adults and children alike. The kiosk located at the trailhead provides interesting and educational information about local geology, 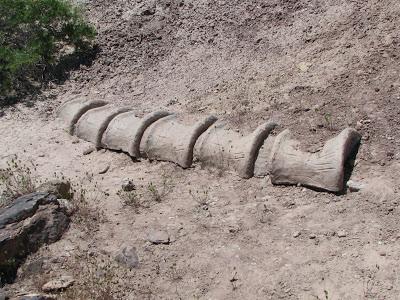 history, and significant paleontological discoveries in the area. At the top of Dinosaur Hill, hikers will enjoy spectacular views of Colorado National Monument's red rock canyons, the Bookcliffs, and the Colorado River. The most famous discovery at Dinosaur Hill was made by paleontologist Elmer Riggs in 1900: two-thirds of the skeleton from a 70-foot-long, 30-ton Apatosaurus. This has been on display at Chicago's Field Museum of Natural History since 1908.

To the southeast of Dinosaur Hill is Riggs Hill, actually named for the aforementioned Elmer Riggs. In 1900, he uncovered a 75-foot-long, 44-ton Brachiosaurus; later on, partial skeletons of Stegosaurus and Allosaurus were also discovered, but later lost due to vandalism. The Museum of Western Colorado, which now maintains Riggs Hill, has done an excellent job of making the 0.75-mile trail located at the site a fun an educational learning experience for everyone. Be sure to look for the cast of a dinosaur bone on the north side of the hill. 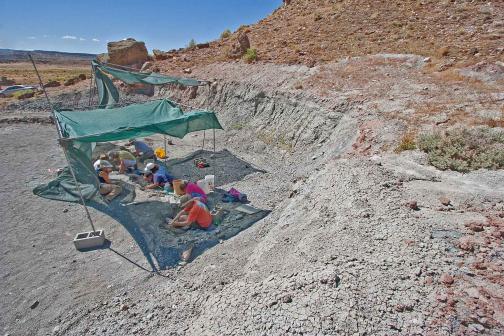 For an even more hands-on experience, try a dinosaur dig offered by the Museum of Western Colorado at the Mygatt-Moore Quarry. These trips take the public into the field to work with paleontologists collecting fossils on half-day, one-day and three-day digs in the quarry. All digs include transportation from the Dinosaur Journey Museum in Fruita to the quarry and a tour of the Dinosaur Journey Paleo Lab. The three-day trip also includes a rafting adventure on the Colorado River.

The Dinosaur Journey Museum in Fruita is the starting point for the dinosaur digs as well as the destination for the dinosaur bones. At the museum, the recovered fossils are cleaned and prepared for study — drop by the museum to watch the process unfold.

Dinosaur Digs leave from the Dinosaur Journey Museum in Fruita. Take I-70 west from Grand Junction to CO-340 south — the museum is about a half-mile down the road on the right. 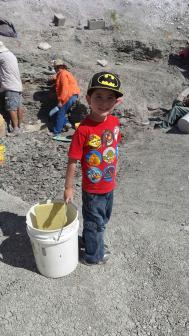 To get to Rabbit Valley and the Trail Through Time, take I-70 west from Grand Junction to exit 2 for Rabbit Valley Road. Head north and drive straight into the park.

To get to Dinosaur Hill, take I-70 west from Grand Junction to the Fruita Exit. Turn left and continue straight for about 1.5 miles. The entrance will be on the left hand side of the road.

To get to Riggs Hill from Grand Junction, take Grand Ave. west from 1st Street for about 3 miles. Turn left on South Broadway and continue for about 1 mile. The trailhead is located on the right.